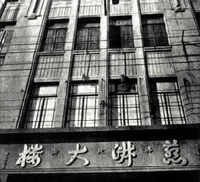 The year 1937 saw the beginning of the War of Resistance Against the Japanese. In the following eight years, the school’s operation both on the Soochow and the Shanghai campuses was undermined by the war. The two campuses were either moved individually or joined up with other universities. With the Japanese surrender in 1945, the teaching faculty and students could finally return to the campuses to start the laborious task of bringing back order to the university. In 1952, the Chinese Communists government implemented adjustments for the colleges. The Soochow Law College in Shanghai was incorporated into the Political Science and Law College of East Chinese University; the Accounting Department was merged with the Shanghai Finance and Economics College; and the Liberal Arts and Science Colleges in Soochow were taken over by the Southern Jiangsu Teachers College. In December 1952, the Southern Jiangsu Teachers College was renamed Jiangsu Teachers College, and in 1982, the same College reorganized and renamed Soochow University.